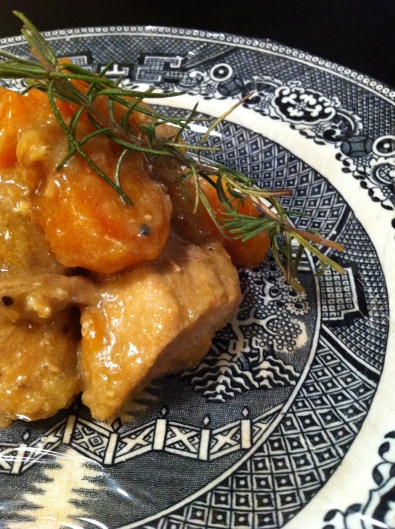 Pork Lemonato, on antique English porcelain courtesy of The Collector

It seems I’ve fallen into a nice little routine of posting a new blog post every Sunday. However, this week I’m getting in an extra one(um, I was supposed to have this uploaded on Thursday. Saturday instead of Sunday isn’t quite breaking the routine!). Anyway.

The past week has actually been a bit of a food blogger’s nightmare. First came a recipe I hoped would rock, but it turned out mediocre (will try it again before posting). This was Monday. Two days later I had a minor disaster when I forgot to turn on the slow cooker before leaving for work in the morning, and a whole turkey breast sat waiting for me all day to get home and cook it some other way (thank goodness it’s still cold these days, otherwise it would have ended up in the bin and that would have been a crime). In the end I tried two different ways, since there was a lot of meat to use up. One of these ways was a turkey korma, with a ready-made sauce (*gasp*). Sometimes shop-bought is just the best option. We’re only human. The other way however, well, that was absolutely gorgeous! But the third and most annoying disaster of the week was that I forgot to take photos of it. So I’ll just have to make it again before telling you all about it. Soon, very soon.

Finally, and having remembered to both plug in the slow cooker and turn it on this morning last Thursday, I have a dish to talk about, complete with photo (antique plate an’ all – thanks Collector!).

I’ve been wanting lately to try out a few traditional Greek recipes adapted for the slow cooker. Greek cuisine has many stew type dishes, which are called “of the saucepan” (katsarolas) because they are –surprise- cooked in a saucepan on the stove top. These are all good candidates and I’m slowly working my way through some of them, so I can share them with you here. 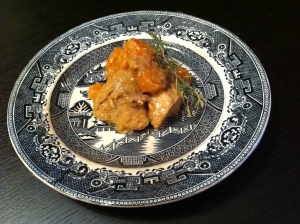 This dish is called Lemonato, which means “lemony”. It’s basically meat, cooked in stock and lemon juice with a few herbs and is usually made with pork, beef, chicken or rabbit (yeah, sorry about that). Mine is pork. Lemonato is mostly served with french fries or rice, or potatoes that are cooked in the pan with the meat and sauce (we had it with mashed potatoes, which is probably unheard of here!). It’s lovely with any of these, but to eat it like a true Greek, you need to also have some crusty bread on hand to scoop up the wonderful lemony sauce. So, here goes.

Due to this being a work day, mine was on for about 9 ½ hours. I think there is a point after which meat becomes a bit tough again in the slow cooker. I’m not sure about this, so I’m going to experiment, but it’s happened a couple of times with some of the recipes I’ve tried, including this one. If you have any idea whether this is the case, please let me know!

This was a really nice dinner, and made even nicer leftovers, but next time I would start checking for doneness after about 7 hours (providing I’m not stuck in my office). I might also omit the rosemary (it was a teeny bit strong for my taste) or maybe replace it with some dried oregano (½ tsp at the most). 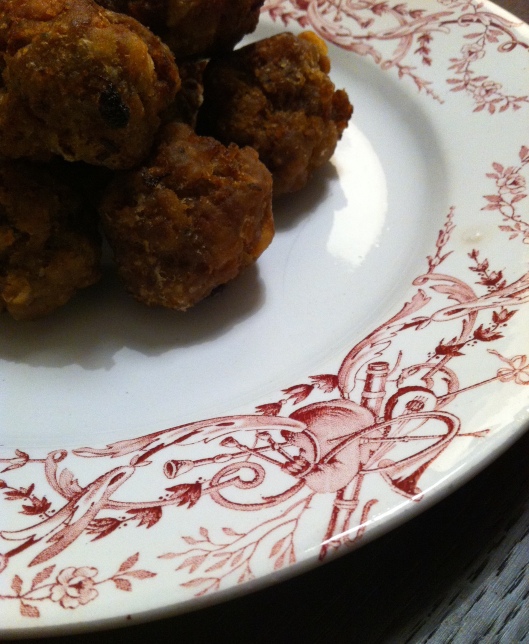 Check out the beautiful plate! Old French porcelain, on kind loan by The Collector.

Lately I’ve been a bit stripped of inspiration. It’s probably something to do with the hundred thoughts swimming round my brain. There are so many ideas, so many things I want to be doing… but 8 hours of work a day seem to be getting in the way. When I was younger I used to say that I would always want to work, even if I won the lottery. Well, I have seriously reconsidered THAT! Oh to win the lottery… (chances are minimum as I don’t actually play it) my life would be so full I wouldn’t have time to miss work. First of all I would buy a horse. Although with the number of people giving away theirs at the moment, I wouldn’t even need to pay for it. You see the problem with keeping a horse here in Greece is, well, “keeping” it. You pay through the nose for livery, farrier, dentist, God forbid vet, lessons and someone to exercise your horse if you can’t. It’s funny, because if I didn’t work I’d be able to do some of that myself (even the mucking out!) and the fees would be fewer. So if I did win the lottery my expenses would be less – how ironic is that?

The other thing taking up my time would be this blog and a couple of other internet projects. I’d really like to pour more time and energy into these. Wow, riding every day, cooking, baking and blogging about all the recipes I’ve tried. Yes, that’s how I’d like to spend my days please!

Hmm, now how can I tie all that to fried meatballs? I won’t even try, as I explained, I’m currently inspirationally challenged. So here’s a recipe for some really good fried meatballs, which we usually have with boiled greens when The Mister’s mum sends some up from the village. You could also serve them with a chopped tomato salad or salsa, Greek yogurt and warm pitta bread. Ooh I know, you could open up a Cypriot pitta (yes, they’re different) and stuff it with these babies, salsa and yogurt. Mm, good idea – hey was that inspiration knocking?

The recipe is by the Greek chef Christoforos Peskias, and is included in the book “Greek Cuisine” a Gastronomos magazine publication.

You’ll need:
2 ½ Tbs olive oil, plus more for frying (or you can use any vegetable oil for frying)
1 medium onion, finely chopped
500g minced meat (I use a mix of beef and pork)
175g bread without crusts, crumbled (make sure it’s stale so it will crumble easily)
1 egg
juice of ½ a lemon
1 ½ tsp dried oregano
½ tsp dried spearmint
salt & freshly ground pepper
flour to coat meatballs

Note: You’ll notice that none of my recipes include garlic. This is because The Mister detests it (note the bold italics). So I don’t even try to fool him by sneaking it into anything! You can add a clove to this recipe if you want, just mince it and cook it with the onion before adding it to the meat mixture. 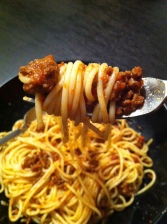 And now for a slow cooker recipe!

The Christmas before last, my mum and I visited my brother and his wife who live in England. My brother is a talented cook, who mostly (unlike me) relies on his imagination to throw together yummy meals. At the time, he had recently discovered the magical world of slow cookers and raved about his new appliance. One evening during our stay we had a gorgeous beef stew which was miraculously waiting for us when we got home from a hard day’s money-spending. It was cool, and I had read about slow cookers a couple of years previously thinking “I should get one of those”, but actually I was not that bothered – I have no idea why. Luckily my mum knows me better than I know myself, and when she returned to Greece two days after me, she surprised me with a gorgeous little purple Crock Pot which she had lugged all the way back for me. Well, I can safely say this has now become my favourite kitchen gadget (um, after my iphone of course).

To be honest, this didn’t happen overnight. As I mentioned in my first post I like to follow recipes. So to start using my slow cooker I turned to –where else- the internet, to find some. I searched and searched, but wasn’t very happy with what I found. It seemed that most recipes were for a pot roast of some kind and always involved tins of cream of something soup, or dried soup, or jars of ready-made sauce. Don’t get me wrong, flipping back the ring of a can of Heinz Tomato Soup is one of my favourite ways to make dinner, but “recipes” featuring, for example, a can of cream of chicken AND a can of cheese soup (which I didn’t even know existed till then) did not sound very appealing. I was starting to feel quite disappointed when I stumbled on A Year of Slow Cooking. Now that was more like it! A blog with a healthy balance of mostly “from scratch” meals, but with a few quick and easy solutions for when you just can’t be bothered! Plus the added bonus of Stephanie’s great sense of humour. That’s when I got well and truly hooked on the slow cooker. A few months later I started using Twitter (an obsession I’ll talk about another time) which introduced me to a whole new world of food blogs, such as Kalyn’s Kitchen, The Perfect Pantry, Healthy Green Kitchen to name but a few. These all include some great slow cooker recipes, and Kalyn has now started a new site called Slow Cooker From Scratch, a great place to find exciting Crock Pot recipes – and not a tin of soup in sight…!

My Bolognese Sauce is based on a recipe by a well known Greek TV chef called Elias Mamalakis, who is also the publishing manager of the Greek version of the BBC’s Olive magazine. I have adapted the original stove top recipe for the slow cooker. What I usually do is make a batch and freeze half of it, either to use in a mini lasagne for two, or for a quick, easy meal after a long day at work. I hope you like it!

For those unlucky people who don’t have a slow cooker, try this:
Use 3 Tbs olive oil and only 1 cup of chopped tomatoes. Omit the stock.

Update on 30th Septmeber 2012:
Kalyn has kindly featured my recipe on Slow Cooker from Scratch! Yay! Check out the post for more fab slow cooker pasta sauce recipes, or the recipe index for loads more ideas. 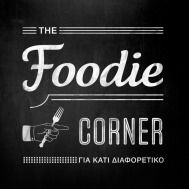