Today is Palm Sunday, the Sunday before Holy Week. Holy Week is one of the most beautiful times of the year in Greece, not just because the weather is usually gorgeous, but because Easter is the most important religious holiday. It’s actually bigger than Christmas, which has sort of caught up in recent generations but is heavily commercial with many “foreign” traditions having infiltrated its celebration. Did you know that traditionally people in Greece used to decorate miniature wooden sail boats and not trees? Hang on, why am I talking about Christmas? Easily distracted? Me?

Back to Easter and Lent. As I mentioned a few weeks back, there are many recipes flying around, in magazines, on tv shows, on blogs, all with great ideas on how to enjoy good food even if you’re fasting (meaning no meat, dairy, eggs etc.).  One such recipe is this little gem. It’s amazingly easy, lusciously chocolatey, and actually quite healthy! The taste leaves behind a hint of halva (the type we call Macedonian, referring to Northern Greece) which is made of tahini and sugar or honey. Now I’m no expert, but dark chocolate, honey, tahini, almonds and even cinnamon, are all said to offer great nutritional benefits. These Chocolate Tahini Bites contain exactly these ingredients and nothing else. Also, they are very rich, so you only need a bite or two!

The recipe is from Sweet Stories, a magazine by Greek pastry chef Stelios Parliaros.

125g dark chocolate, chopped
125g tahini
50g honey
1/4 tsp cinnamon
50g almonds without skin (I used slivered because it was all I had, use chopped if you want more crunch)
Icing sugar or cocoa powder for dusting (optional) 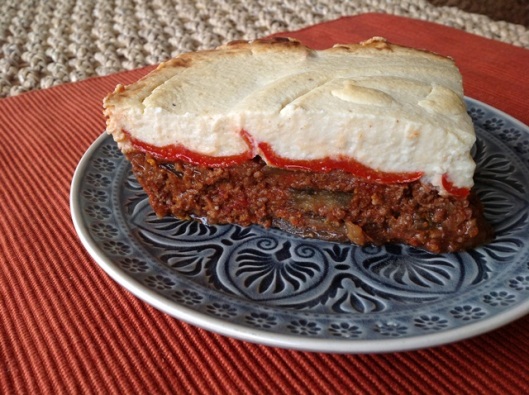 This is a complicated recipe. It’s not at all difficult, but there are many steps to it. It’s not a throw-together-right-after-work meal, but you can make it in stages over a couple of days; and that makes life a lot easier. The seed for this idea was planted when I made the Healthier Mac & Cheese using a cauliflower béchamel. I started wondering if I could use this sauce in a lasagna, but then it occurred to me that it’s actually Dukan friendly. So my thoughts turned towards adapting a classic dish to suit this protein and veg based diet. Lasagna was out due to the pasta, so what else could I make? Moussaka of course! Sadly the potato had to be replaced, but layers of red peppers compensated by lending their sweetness and bright colour to the dish.

On my first go at this experiment I tried to dry fry slices of aubergine (no oil is allowed in the diet) so as to keep with the traditional layering of meat and veg. That didn’t really go too well; aubergines like their olive oil. Also, I made the cauliflower sauce based on the mac & cheese recipe, which turned out a bit too watery and meant the top layer was very thin. So the second time round, I cooked the aubergine (eggplant) together with the meat in order to overcome the dryness issue, and made a thicker cauli sauce without the addition of water. There were less layers than traditional moussaka, but everything held together much better, and the result was tastier and much prettier!

I used the slow cooker to make the meat part, since this is by far the best method for cooking without oil or any other kind of fat. It’s also a great way to make minced meat sauces in general, as they always benefit from long simmering on low heat. I always leave my Bolognese on for a good 10 hours. If you don’t have a slow cooker I’m sure it would work just fine on the stovetop. Use water to gently cook the onion, then add the meat, and don’t forget to drain the fat before adding the rest of the ingredients. You want the result to be quite thick so watch the amount of liquid you add.

Before it’s cooked , the aubergine needs a bit of alone time with a good sprinkling of salt (don’t worry, it’s rinsed off!). This helps get rid of the bitterness that sometimes comes with this vegetable. I recently heard an interesting tip for those who grow their own aubergines; apparently if you plant them next to basil they’ll be less bitter to begin with!

As regards the preparation of this dish, what I did was make the meat sauce the first day. Then in the evening I made the cauliflower puree. Both went in the fridge overnight. The next day I made the peppers, mixed the puree with the rest of the topping ingredients, layered it all up in the baking dish and baked it. Broken up like that it’s not that big a deal really. And it’s well worth it! Oh, you could also use store bought roasted red peppers, but since they are usually preserved in oil it would be cheating a bit.

If you are not on the Dukan Diet, this is still a recommended recipe. It’s super healthy, low in fat, and very tasty. I suggest you sprinkle some grated cheese on top before baking! (Also allowed in the Consolidation phase of the diet) 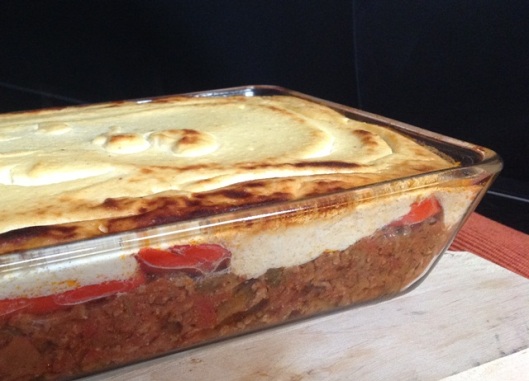 2 red peppers (I used the long Greek ones, but bell peppers would be fine)

Other Moussaka recipes – but none of them Dukan!
Moussaka by Brown Eyed Baker
Vegetable Moussaka by The Shiksa in the Kitchen
Leek Moussaka by The Perfect Pantry
And something a little different… Mussaka by FatFree Vegan Kitchen